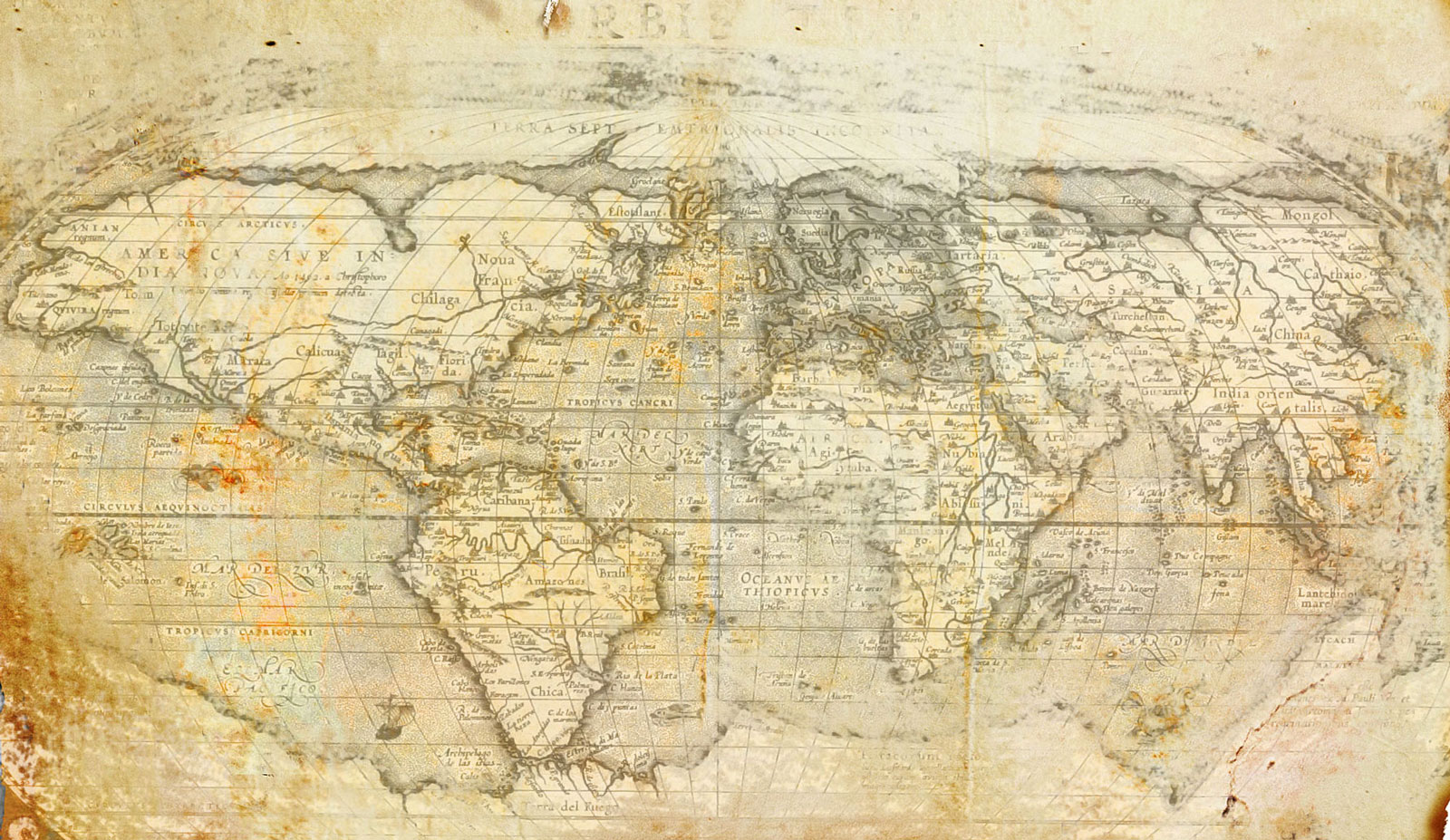 When living in another country, eating your former local cuisine can bring back all kinds of memories.

Food and memory are undoubtedly linked, and what could be more powerful than the provocations of a dish you associate with home? Here, five ex-pat food lovers talk about the dishes that remind them of family, growing up, and their homeland. 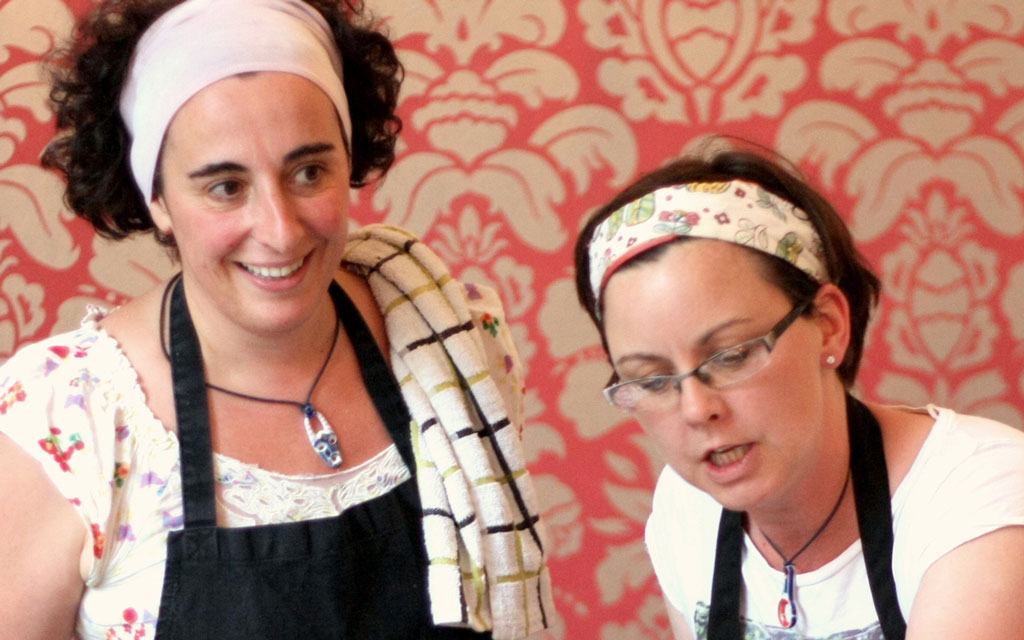 Ana Gomez (left) at her supperclub

Where were you born? In Vigo, Galicia.

Which dish/dishes reminds you most of your homeland, and why? Octopus (pulpo), as it was always a treat as a child and an excuse to eat with my parents as they went to a ‘romeria’ quite a lot (a kind of festival) in Galicia, where you have women cooking octopus à la feria in big copper pots. It’s incredible to see and is an amazing atmosphere!

Sea urchin caviar with a good white wine brings me back memories of being with my family in my uncle’s house by the beach. They were collected 20 minutes away – you can’t get fresher.

Empanada gallega (Galician pie) reminds me of being with family and friends eating out. It’s a must on Sundays – going to the best local bakery to buy one, and queue as the good bakeries were always packed and worth the wait. The variety is immense, from fillings of cod to calamari or clams, to meat and vegetables. Good fish also reminds me of my mother who went almost every morning to the fish market to buy different varieties of fresh fish. Good wine always brings back memories of being with family and friends and having a good time. 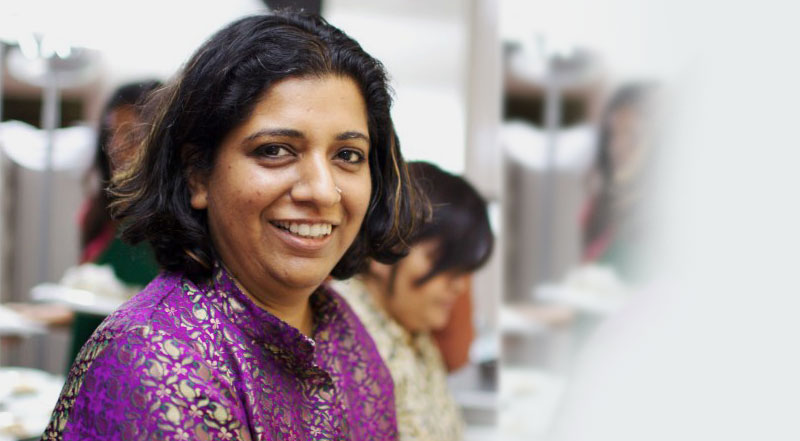 Asma Khan in the kitchen

Where were you born? I was born in Calcutta (now called Kolkata) in Eastern India. As with all port cities around the world, located on the banks of the Hooghly River, Calcutta is a confluence of myriad food cultures and flavours. Each and every traveller and trader community left their legacy in the form of a distinct culinary footprint. I was really fortunate to be born in a city which many consider the food capital of India.

When did you move to Britain? In 1991. I lived in Cambridge for a few years and then moved to London.

Which dish/dishes reminds you most of your homeland, and why? It would have to be the flat tawa fried paratha! Paratha is something I would yearn for in my early days in Cambridge… I did not know how to cook when I moved to this country and I remember standing outside a house in Cambridge where someone was making a paratha (I could smell it as I walked past!) and trying to get the courage to knock on the door and ask if they would share it with me! In the end I did not knock but walked away remembering home, missing the food and determined this would be the last winter where I would eat my husband’s cooking and pizza! On my next trip back to India, I asked my family to teach me how to cook. After that there was no looking back. 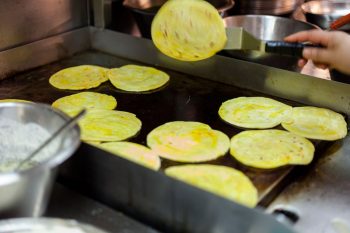 A staggering variety of parathas exist in India. Parathas are flat griddle fried breads (made on a tawa) and can be made with a variety of flours and some versions are stuffed with potatoes, vegetables or meat. Very bravely, I did a paratha supperclub recently.

When I lived in India, we always had paratha and fried egg for breakfast on Sundays. This is now standard Sunday breakfast in my house in London. My kids are 13 and 8 and they really love it… adding tomato ketchup to it (that would be a total no-no in my family in India!)

Parathas are also served in traditional festive meals and weddings in my culture (I am half Rajput and half Bengali – the food tradition is mainly Mughlai and North Indian). The reason why parathas are always served in these traditional banquets is that the menu always has kababs and dishes like murgh mussallam which are traditionally eaten with parathas. I know in Britain, naan is the popular bread that most people would associate with Indian food. That is not the case in India. The clay ovens (tandoors) are only common in places like Punjab. Most homes in other Indian states would not have their own tandoor.

Parathas require just a basic tawa… a lot of elbow grease and some parathas such as the layered lacheadr paratha and stuffed parathas, require some skill and practice.

For me, the paratha is classic comfort food. It is also the bread I associate with our traditional banquets. This versatile bread has some basic preparation steps which is common for many paratha varieties. Once you master these basic techniques the world is your oyster. After that you can experiment and expand your repertoire! 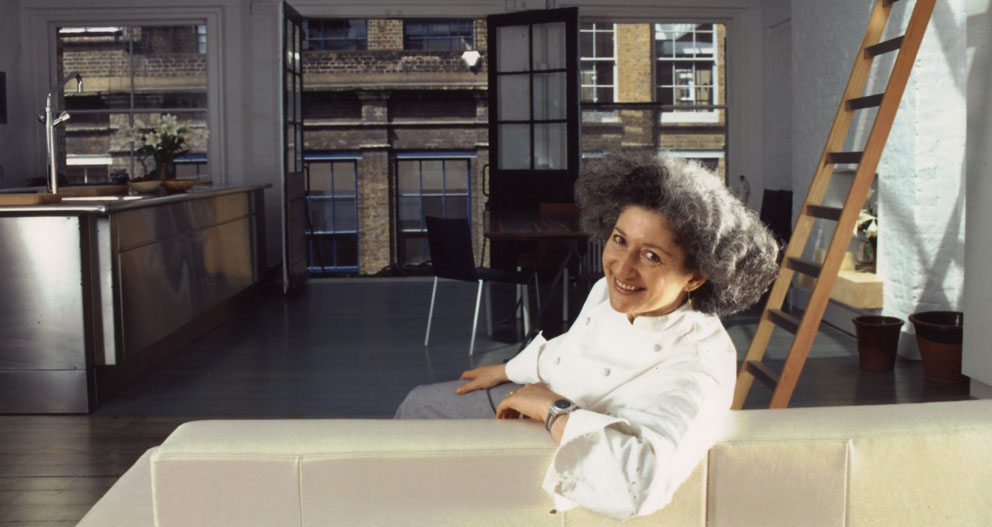 Anissa Helou in her kitchen

Where were you born? Beirut.

When did you move to Britain? In 1973. I was on my way to Geneva to do interpreter’s school but fell in love with the friend I was staying with in London. I ended up living with him with for 5 years and after that I had a home in London even when I lived in Paris and after that Kuwait.

Which dish/dishes reminds you most of your homeland, and why? Stuffed vegetables (mehshi) because my grandmother always made them for us when we visited and hers were the absolute best. Lubiyeh bil-zeyt (flat green beans in tomato sauce) because it is the first dish I ever cooked and it still is one of my favourite dishes. Kibbeh bil-saniyeh (kibbeh pie) because it always brings back memories of my mother’s beautiful hands, how she flattened the kibbeh in the baking dish and then decorated it with the most delicate geometric pattern. And finally pale green figs because I used to greedily pick them from my father’s tree in Mashta el-Helou in Syria and gulp them down quickly before being told off for eating too many. 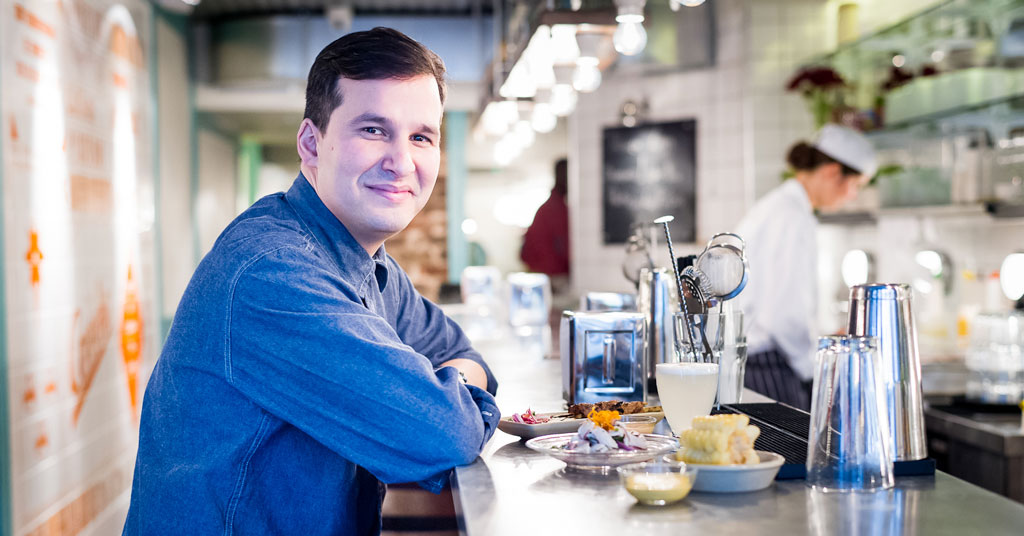 Where were you born? I was born in Lima, Peru.

When did you move to Britain? I moved to Britain on the 10 September 1984.

Which dish/dishes reminds you most of your homeland, and why?

Pork adobo – Mamita Naty was my grandmother’s name. She was an Andina. An Andina is a lady from the Andes; strong, hard-working and no-nonsense. Always great cooks. She came from a village called Santiago de Chuco, high up in the Andes, 14 hours dirt-track from the nearest city. Mamita Naty worked her way up to Lord Mayoress and was feared by the locals. I always like to think that she was like the Iron Lady of the Mountains. I first visited her when I was 4 years old. We arrived covered in dust after the bus journey through the mountains and were greeted by this most incredible dish: pork adobo. 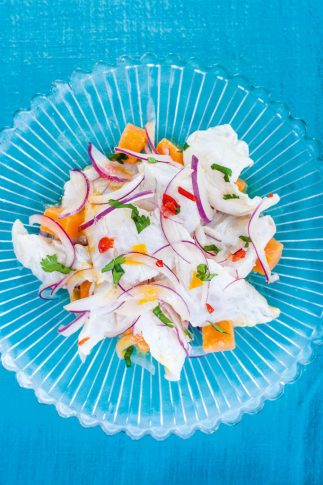 It’s a kind of slow cooked pork marinated overnight in panca chillies; the juice of the bones combined with spices and other ingredients and was cooked over fire. The animal had been slaughtered just to celebrate our arrival. Once served, the pork just fell off the bone like the best pulled pork you ever tasted. I owe my love for cooking to Mamita Naty, to the treasures in the Andean larder and to the fantastic recipes that I’ve inherited from the people of the Andes.

Ceviche – it’s my first memory of a dish that blew my mind. Raw fish straight out of the sea, with fiery Peruvian chillis, crunchy onions, and that incredible juice known as ‘Tiger’s Milk’. I first had it in the port of Pucusana, south of Lima. My dad used to take my sister and I there fishing and we would catch 30 or 40 fish in just a couple of hours. Once, even my great grandmother came, but unfortunately she missed a step and fell out of the boat and into the murky port waters. It was like a scene in a Peruvian Carry On film. She was alright, but she vowed never to eat fish again. The next stay she was eating ceviches and frito mixto ‘jaleas’ once again. I would never have imagined then that I would be opening a restaurant called Ceviche 30 years later and also writing a cookbook which featured some of its best recipes. 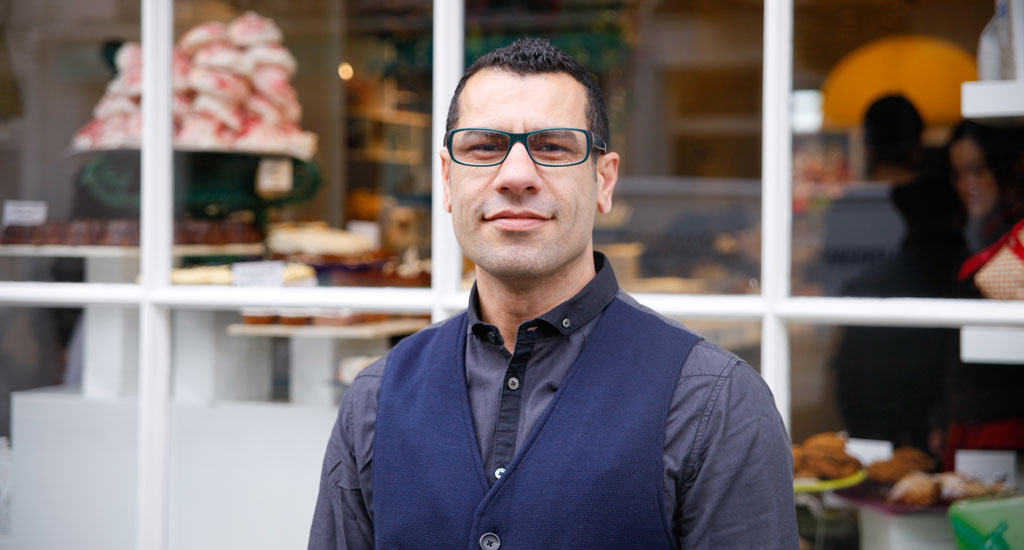 Where were you born? In the old city of Jerusalem.

When did you move to Britain? In 1997 I moved to London after many visits with my partner at the time. There were two reasons for the move: the situation in Israel/Palestine was getting worse and very stressful for me; I felt that my cooking career was not moving forward. I have fallen in love with London and 17 years down the line I am still in love with it.

Which dish/dishes reminds you most of your homeland, and why? Fried cauliflower because when my mother used to make maqluba, (as kids we used to call it Maqluba Day) she fried lots of different vegetables in preparation. We used to get some of the fried vegetables, mixed with fresh garlic and lemon, as a sandwich in a pitta for lunch and the maqluba for dinner. My favourite vegetable was the cauliflower. To this day, every time I fry or roast cauliflower the smell takes me back in time, and of course the maqluba itself because it’s super comfort food for me and normally will be served with plain yoghurt and a chopped vegetable salad.

Stuffed vine leaves, because I will always remember my mother and aunties sitting around gossiping and skilfully rolling these cigar-shaped vine leaves. Although secretly I loved my grandmother’s vine leaves better because she used to cook them with some lamb chunks on the bone so hers tasted richer.

Warm bread dipped in olive oil and za’atar because we often had it for breakfast along with white cheese and vegetable salad. 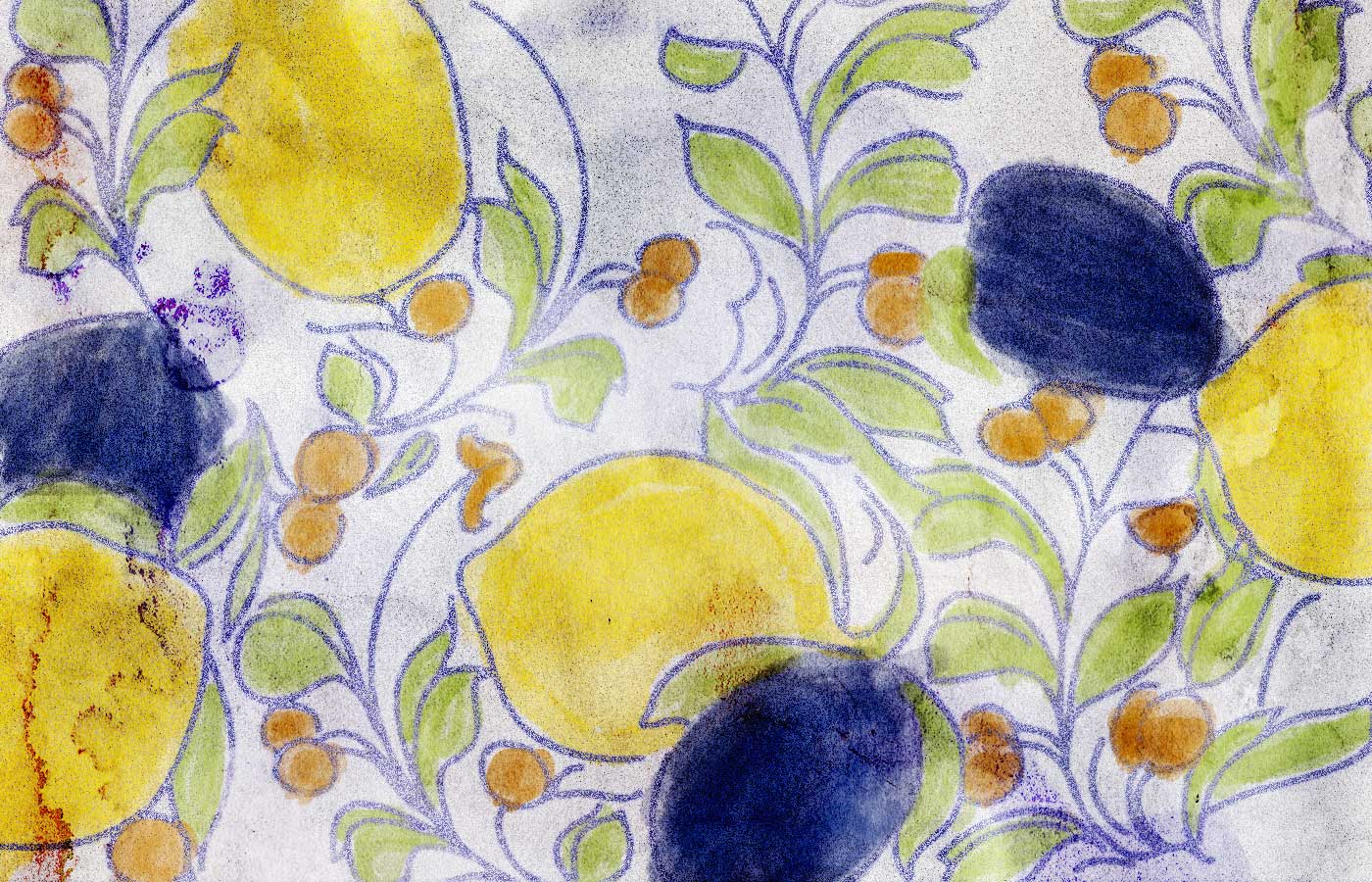 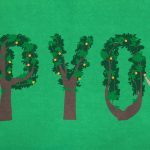 Open farms inviting you to pick your own offer not only the freshest of fruit but a reminder of simpler times.